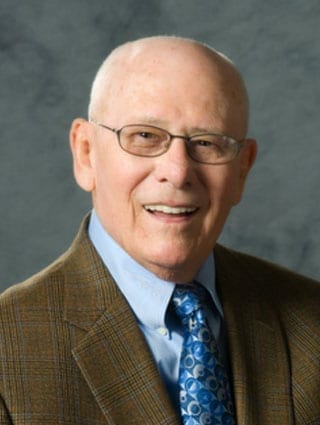 Jack Arthur’s unwavering commitment to the Lord continues to impact the lives of countless people through his strong faithful service to the Lord Jesus Christ and Precept Ministries International. God’s call on Jack’s life started early. Raised by his grandparents on their Indiana farm, Jack began to hear God whispering to his heart.

Five days after graduating from high school in 1944, Jack joined the Navy. Twice God removed Jack from ships that were later destroyed during the war. God’s sovereign hand was clearly on Jack’s life.

Jack later spent a few months at Purdue University, but without a clear direction for a career, he left school to go back to the family farm. In 1953, after trying his hand at various jobs, at the urging of his Sunday School teacher Jack went to Tennessee Temple University where God’s call to the mission field became evident.

The night Jack graduated from Tennessee Temple with a Th.G. in 1956, he drove his car back to Indiana, sold it and used the money to buy a ticket to Africa. Saying goodbye to his grandparents, he began an adventure that would eventually take him to 70 countries, serving with The Pocket Testament League for 10 years.

God used Jack’s passion for missions to call many others to give their lives for foreign missions as he spoke at Tennessee Temple’s chapel meetings. It was on one of these visits ‘back home’ in 1965 that Jack met a young widow with two sons, a woman two years old in the Lord who wanted to be a missionary—and who, while a student at Temple, was told by the Lord that she was going to marry “Jack Arthur.” Until that ‘night’ all Kay had was Jack’s picture on a missionary prayer card.

Little did they realize what God had in His plan. While serving the Lord as independent missionaries in Mexico for three and a half years, God gave Jack and Kay a son, David Lee Arthur. They named him David because they wanted a “man after God’s own heart”—and that he is! When Jack and Kay were forced to leave Mexico because Kay developed a heart condition, they didn’t realize that God had in mind a ministry that would reach far beyond Mexico to nearly 150 countries and 70 languages—but in His time and His way.

After returning to Chattanooga, Jack became station manager of WKES-FM, a Christian radio station, and Kay, at the request of their church, began to teach the Bible to teens in their home.

The student ministry grew to such large numbers that as they prayed about where to meet, God laid “farm” on their hearts. And a farm it was! Thirty-two acres just five minutes from the airport where eventually people would fly in from all over the world. As the ministry expanded from teens to adults and children, all hungry to know how to study God’s Word for themselves, and the workload became greater, in 1970 Jack left the radio station to work full time in the ministry. Buildings began to go up and Jack was never happier than when involved in their construction or riding the tractor again, cutting the grass and hay. It’s quite a story—a testimony of the faithfulness of God in the life of a faithful man.

Jack, who battled cancer and Alzheimer’s Disease, died peacefully in his home early in the morning of January 9, 2017 with his loving wife of half a century, Kay, by his side. He was 90. The couple had celebrated their 51st anniversary on December 16, 2016.”

To engage people in relationship with God through knowing His Word.

Every believer in Christ living out God’s Word every day.